The effect of particle size distribution

The effect of particle size distribution

A significant variation in particle size distribution (PSD) is generally encountered in slurry transportation. Clift et al. (1982) found that the value of exponent M is nearly equal to 1.7 for narrow size grading and the same value was observed for broader grading. Wilson et al. (1990) performed tests on a broader range of particle size and found out that the slope is now much flatter, with M ≈ 0.9. The influence of particle grading on distribution parameter M is evident here. So, it has been observed that the value of M decreases as the grading becomes broader. A plausible reason for this behavior can be found by considering how M is related to standard deviation of the integrated log-normal distribution representing the ogee curve. The magnitude of M is the same as the slope of a log-log plot of the integrated probability function. If this slope is evaluated at some fixed value of Vm/V50, it will be found that M is inversely proportional to the standard deviation of log(Vm/V50), where log indicates the logarithm to the base 10. This standard deviation is denoted here by σ10.

For the case of uniform particles, a condition approximated by narrow particle grading, V50 is constant, so that the variation which accounts for the observed value of σ10 must be associated with the inherently stochastic nature of the turbulent flow field. As the value of σ10 for this uniform-particle condition depends only on fluid turbulence it is denoted by the symbol σf. For fully-developed turbulent flow it may be assumed that σf will be sensibly constant.

With M inversely proportional to σ10, and σf effectively constant, it follows the expression for M is of the form

This equation includes the proviso that a calculated M larger than 1.7 must be reduced to that value.

Let us understand the calculation with an example using d85 and d50. The value of cosh(60d85 /D) is readily calculated, and the associated value of w(i.e. w85) can be obtained from graph below. The value of σs is then given by 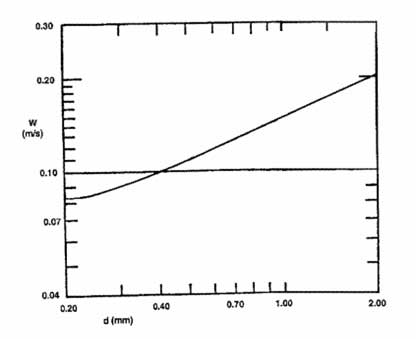 D → internal diameter of a pipe

σf → Component of σ10 due to fluid turbulence