A rheogram can be defined as the relationship between shear stress (τ) and strain rate (du/dy). The simplest rheogram, with a single rheological parameter, µ, is that of a Newtonian liquid, such as water, where the following equation is obeyed:

Here, µ represents the dynamic viscosity of the fluid. The rheogram of a Newtonian fluid is a straight line that passes through the origin and has a slope µ as shown in the figure below. 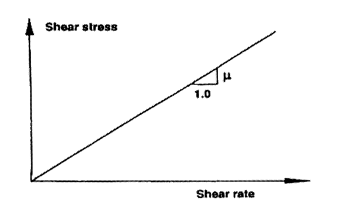 The next step upward in complexity is represented by two parameter models. True fluids have a rheogram that passes through the origin but may not be a straight line. Hence, the power law model may be employed with parameters k and n:

For a plastic material, the rheogram does not pass through the origin, and no strain rate occurs until the shear stress exceeds some yield value τy. A simple two-parameter model called the Bingham plastic is often employed to quantify this behaviour. Its rheogram is linear, passing through the Bingham yield stress τB at du/dy = 0 and having a slope ηB that is called 'plastic viscosity', or 'tangent viscosity'. Thus,

If a material shows non-linear behaviour at low shear rates, a better fit may be obtained with the Casson model, given by the equation:

The introduction of additional parameters may seem to improve the fit of the model to the rheological data, but in practice calibration of a three-parameter model is very difficult. One example of three-parameter model that used is the yield-power-law or Herschel-Bulkley model, with the equation: 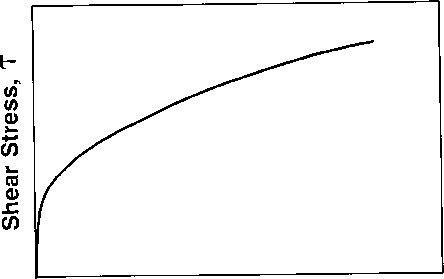 The rheological model is first selected and is fitted to the data points of the rheogram, and the specific values of parameters such as ty, k, and n are determined. It is important to know whether the flow in the prototype pipeline will be laminar or turbulent, and to be able to predict pressure drop in terms of mean velocity. This can be determined by integration of the rheological-model equation. An alternative to this method is the use of a tube viscometer. By making use of tube viscometer, it is possible to extend the experimental range into the turbulent flow region. Since the turbulent-flow data can be scaled directly to prototype size, this technique is recommended.